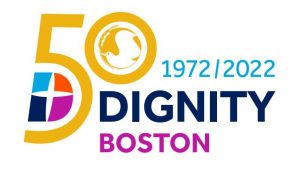 Welcome to the Dignity Boston Community

Dignity Boston is a progressive and inclusive Catholic community for people of all sexual orientations, genders and gender identities, including gay, lesbian, bisexual, transgender, queer and intersex persons, our family, friends and supporters. All are welcome.

We are part of a much larger organization, DignityUSA, a national organization with chapters and members all across the country.

When liturgies are in person, we gather to celebrate the Eucharist and our lives as LGBTQI Catholics at St. Stephen’s Church at 419 Shawmut Avenue in Boston’s south end typically at 5 pm on a Sunday.

Formed in the first waves of the Gay Liberation movement that followed the Stonewall Riots, Dignity Boston has been providing a home for gay, lesbian, bisexual, transgender, queer and intersex (GLBTQI) Catholics, our friends and supporters since 1972.

Dignity Boston works closely with groups such as Call to Action and Women’s Ordination Conference working for social justice and reform in the Church.

Throughout its more than four decades, Dignity Boston has been a leading voice in the LGBTQI community.

Our three main ministries are:

In addition to creating a welcoming home for LGBTQI Catholics, there are many ways we have worked to make a difference the world.